I started to get interested in kokeshi dolls through Kimmidol, which are modern versions designed for a more Western market. As it always happens to me, I am passionate about the stories behind the traditions and search until I know more!

What are kokeshi dolls?

Kokeshi dolls are Japanese handicraft products that were born in the Edo period (1603-1868) as a souvenir for those who went to the Tōhoku onsen. Even today in Naruko, Miyagi Prefecture, there is a street dedicated to kokeshi dolls, handmade by at least eighty expert craftsmen. The kokeshi of this city are among the most renowned and appreciated, they are easily recognized by features such as broad shoulders and narrow waist and often have a chrysanthemum painted on the body. Also, if the head is turned, the doll makes a sound similar to that of a crying baby.

Kokeshi accompany children in their growth

Kokeshi dolls were originally created to accompany children in the growth process, becoming their “substitutes”. In fact, it was believed that the infant soul, once grown, would enter the doll to make room for the adult soul. At this point the doll was burned to free the spirit, so that the child could advance to adulthood, which is why it is extremely difficult to find the oldest kokeshi. However, some can be found dating back to the postwar period, because the idea that the soul continued to exist inside the doll helped to comfort parents who had lost their children. 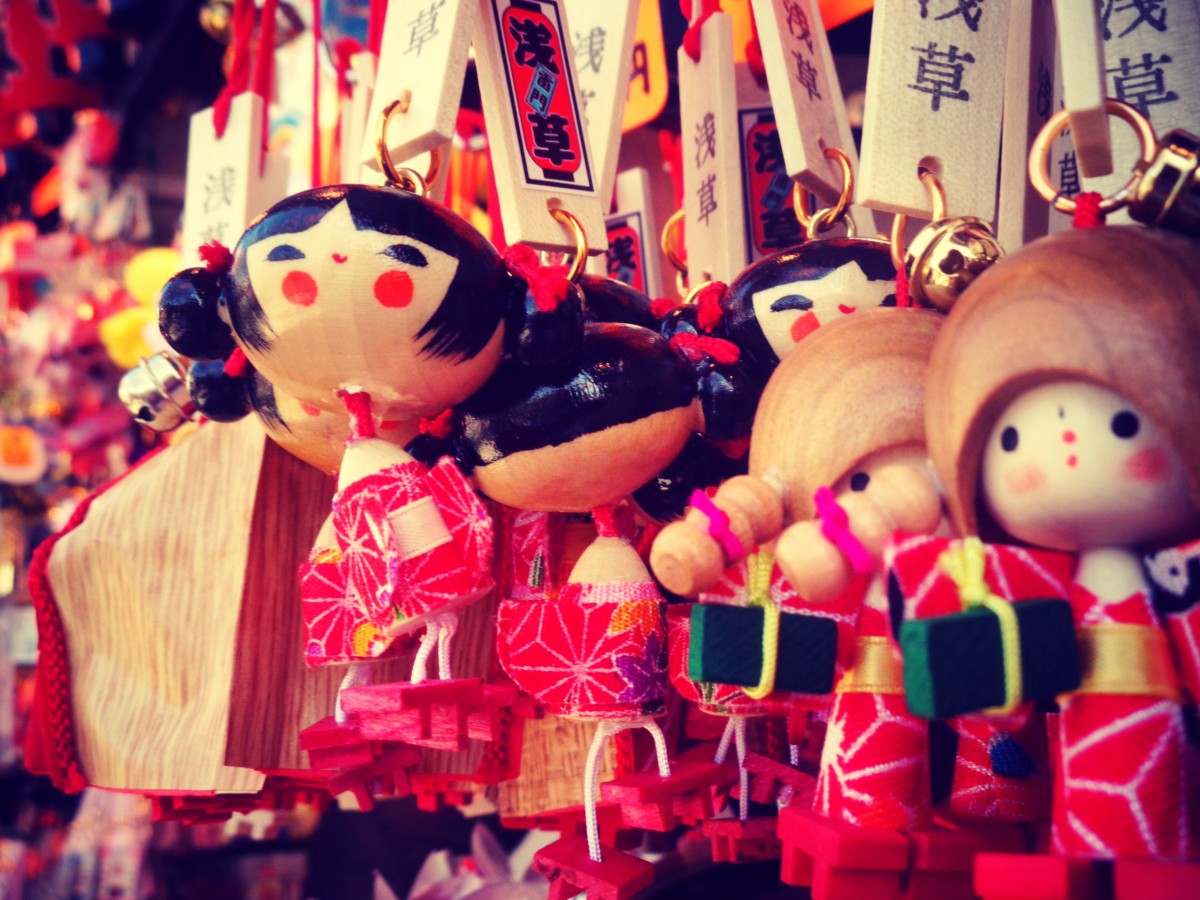 How do you make a kokeshi doll?

Craftsmen traditionally carve kokeshi dolls out of wood. They prefer ductile woods, such as cherry, Mizuki tree or Japanese maple. The process takes a long time, as the chosen wood must be allowed to dry for six months to five years before being cut, polished and shaped on the lathe. The turning follows precise rules: the head of the doll must have a spherical shape and be the largest part of the kokeshi, while the body is thinner and cylindrical. The head and body are forged separately and joined at a later time.

Once these steps are completed, the doll is polished and then hand painted; the head represents a female face, while floral or kimono motifs are often made on the body. This phase requires a lot of skill and concentration, because the kokeshi doll’s expression must change depending on the angle from which you look at it. Finally, the craftsman covers the kokeshi with a special layer of wax to protect its color and shine.

Traditional kokeshi (dentō-kokeshi) are still widespread in Tōhoku and are distinguished by their long torso and small head; this shape and the motifs painted on the dolls’ bodies are characteristic of local production and have remained practically unchanged from the origins. Creative kokeshi (shingata-kokeshi) can be found almost everywhere, have a shorter, rounded bust and are painted with more modern motifs. Kokeshi is celebrated today as one of the popular arts of Japan.

In addition to protecting children, kokeshi dolls decorate and defend the house from bad luck. It is believed that those made with the wood of the Mizuki tree also protect against fires, as this is a very damp wood, so it is believed that keeping pieces of it at home helps prevent fires.

Where to find kokeshi?

In addition to visiting the Tōhoku and its onsen, kokeshi are now considered collectibles. It is therefore worth checking out the fairs or flea markets, as well as the souvenir stalls in Nakamise-dori in Tokyo. Today, there are many versions made of different materials and also produced in Europe, designed as small gifts for friends and family or as decorations. Compared to traditional ones, this type of kokeshi doll is more colorful and comes in the form of necklaces, key rings, make-up pouches or stationery accessories.

Expat for 5+ years. Writer. INFP. Explorer of life and the world.
Currently based in Tokyo, Japan.